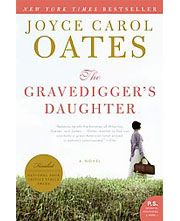 $518,50
In 1936 the Schwarts, an immigrant family desperate to escape Nazi Germany, settle in a small town in upstate New York, where the father, a former high school teacher, is demeaned by the only job he can get: gravedigger and cemetery caretaker. After local prejudice and the family"s own emotional frailty result in unspeakable tragedy, the gravedigger"s daughter, Rebecca, begins her astonishing pilgrimage into America, an odyssey of erotic risk and imaginative daring, ingenious self-invention, and, in the end, a bittersweet—but very "American"—triumph. "You are born here, they will not hurt you"—so the gravedigger has predicted for his daughter, which will turn out to be true. In The Gravedigger"s Daughter, Oates has created a masterpiece of domestic yet mythic realism, at once emotionally engaging and intellectually provocative: an intimately observed testimony to the resilience of the individual to set beside such predecessors as The Falls, Blonde, and We Were the Mulvaneys
Disponibilidad: No está disponible
Código/ISBN
9780061236839
Facebook Twitter LinkedIn Google + Email
Añadir a la Lista de Deseos Añadir para comparar
Detalles
Nada
Más Información